jAlbum 23 is here, listing a whopping 17 improvements and 15 bug fixes. As always you'll find the full list in our release notes. Here I'll try to give you an overview of the most notable improvements. 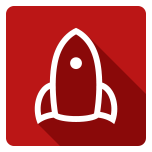 Don't you just hate it when software grows larger and slower over time? We do. Every now and then we therefore revisit the code to see whether it can be made more performant. It's mainly about two things: Doing less (repetitive) work, and doing more work at the same time. People aren't good at this, but computers should, especially if they have multi-core CPUs. You'll find that jAlbum 23 responds faster when opening projects and navigating folders due to better use of multiple CPU cores. We estimate around 30-50% improvement on a 4 core CPU (MacBook Pro 2015). The album making process has also been revisited to eliminate "warm up" costs when doing repetitive album builds: We now keep the script engine between album builds and also keep cached compiled copies of all scripts. We've also gained around 20% better album making performance due to better parallelism (updating a huge "Tiger" skin project). Finally, image filter processing is now also done in parallel to achieve better performance.

One guiding principle in user interface design is to not surprise the user. Here I have to admit that we've failed when it comes to image ordering, especially in relation to drag and drop. jAlbum hasn't always positioned newly dropped items exactly where you dropped them, and after a screen refresh, they might have been reordered to match the folder's sort order, but was this expected? Sometimes jAlbum will change the sort order, but was this expected? jAlbum 23 tries to behave in a more predicable manner and give you more control at the same time.

Before explaining further, let me just quickly explain how image ordering in jAlbum works: Historically, jAlbum provided one type of sort order for the whole album (by camera date, alphabetically etc). This is controlled under Settings->Pages and is referred to as "jAlbum ordering". Later, we added folder specific ordering. This ordering can either be in accordance to the global "jAlbum ordering" or something else, like "Camera date ordering". There's also "Custom ordering" which simply means "You decide by drag and drop". Folder specific ordering is controlled under View->Order by.

So what's new? Apart from fixing bugs, jAlbum now introduces two methods of dropping new files onto a folder. The first method, the "specific drop" positions the newly dropped files exactly where the caret so indicates. This also switches the sort order to "Custom ordering" in order to respect your choice. The switch will be hinted with an animated text so you shouldn't be surprised that the sort order changed. The second way of dropping positions the newly dropped files in accordance with the folder's current sort order. You'll get this behavior if you either drop files onto a folder (either in the folder tree or in the Explorer area) OR if you drop files into the margin area of the Explorer view. This mode is indicated by a "drop rectangle" appearing over the Explorer area instead of a caret. This is actually better explained by this short video. View it! 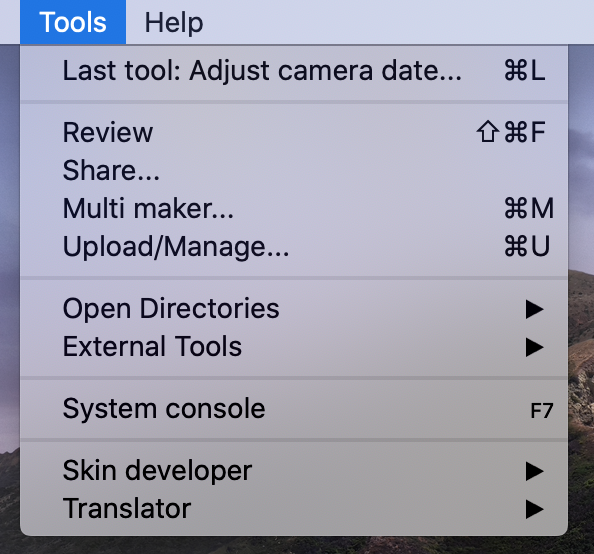 Among the new features of v23 I'd like to highlight the "Last used" tool. This little efficiency enhancer remembers the tool you last executed and binds it to the CTRL/CMD+L keyboard shortcut or Tools->Last tool menu. If you find yourself repeatedly executing a certain tool over a range of images, say straightening several images or adjusting the camera date of several images, then this is a time saver!

Fixing bugs is as (if not more) important as introducing new features. v23 has over 15 fixes. The most notable one being support for Mac OS "Big Sur". I'm also particularly happy that we spotted an ancient bug that caused occasional script errors during album making, typically triggered by instantly making an album after switching skin, which happens if you keep jAlbum's preview window open while switching skin.

I hope you're eager to install jAlbum 23. We've arranged 30 new trial days to everyone so you have a good chance to evaluate it. Also remember that this is a free update to anyone who is on a current support & update plan (See Help->About). Download jAlbum 23 today!

8 reasons to update to jAlbum 22

In the past 18 years we have never stopped improving jAlbum. The last two years are no exceptions. Here we present what we think are the top 8 reasons to update jAlbum based on recent improvements.

The world around us is changing, so are web standards and the use of mobile devices. Today, more than 50% of jAlbum galleries are viewed from mobile devices. Ensure your galleries play well on mobile devices too by using current skins like Tiger, PhotoBlogger, Lucid, Animatics or Projector.

Don’t get lost among hundreds of settings. Find the right setting, project or image in a snap using jAlbum’s Search Bar. Enjoy the instant preview offered in our latest skins. Use the new Project Gallery to visually browse web preview thumbnails of your projects.

jAlbum has a Rewritten upload engine providing faster and more robust uploads. We’ve made performance enhancements to both the user interface as well as album making. jAlbum can also make and upload multiple album projects in the background while you continue working with it.

jAlbum’s improved review mode helps you select, compare and rate your top images. The new Details editor gives you better overview of and allows edits to the metadata of your choice

Don’t fight old bugs or user interface quirks. Update jAlbum to have them fixed. If you still encounter one, write us so we can fix it. jAlbum’s user interface has undergone many small, but important changes over the years that also saves you time and frustration.

Well, almost ;-). We just lowered the prices 20%. On top of that, you get an additional 30% discount for being an existing licensed user. Now’s a good time to upgrade to jAlbum 22!

Check out our new prices!

We've released Projector 2.0 a few days ago. The big news is the interactive preview on the User Interface which makes customizing the skin a lot easier; you don't have to Make Album and Preview every time to test a color or a particular setting. 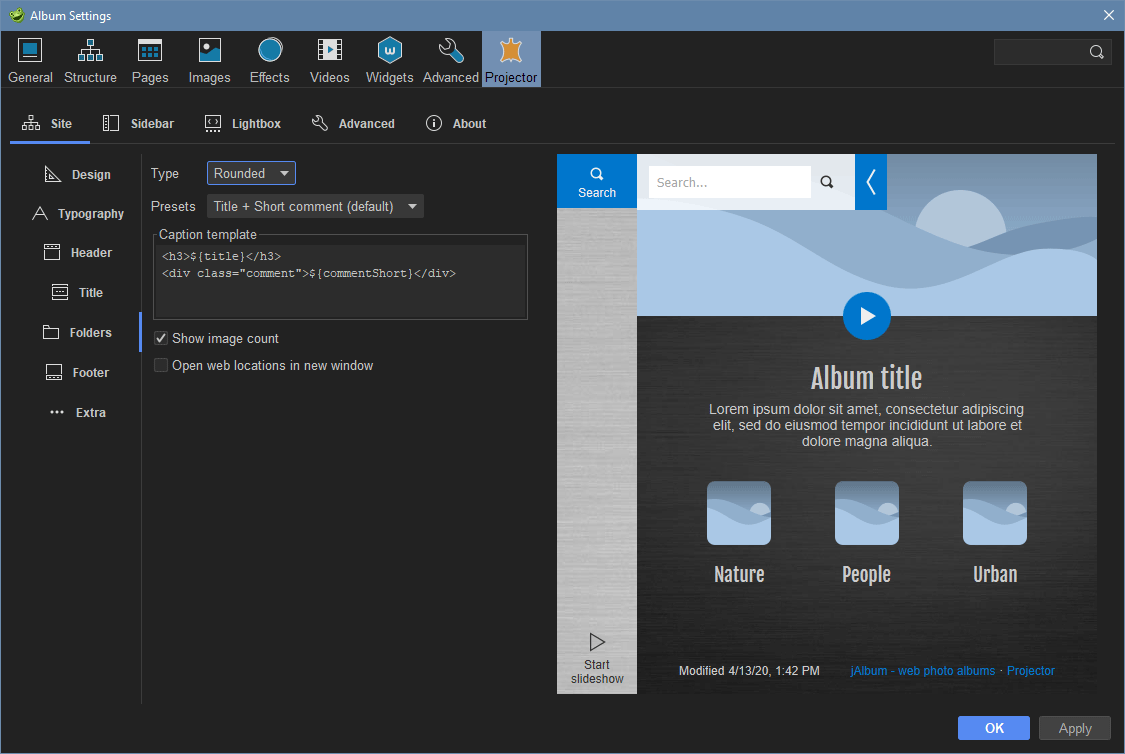 Naturally, this preview cannot reflect the effect of each and every setting, still it'll save you from a lot of guesswork, hopefully.

Perhaps not the most spectacular change, but all picture transitions were rewritten to avoid lags and choppiness. By the way, this code was originally made for our wordpress plugin - jAlbum bridge 2.0 - which has also been updated recently to work with WordPress' interactive Block Editor.

Comments are welcome – please post bug reports in the skin’s own forum.

If you're a heavy user of your computer's calendar and have loads of unorganized images, then you'll love jAlbum 20.2's new "Organize by calendar" feature that can tag and group (move into folders) images by matching calendar events, judging by the camera date. Here I have set up a "Seasons" calendar within Apple's Calendar app representing the four seasons Winter, Spring, Summer and Autumn. 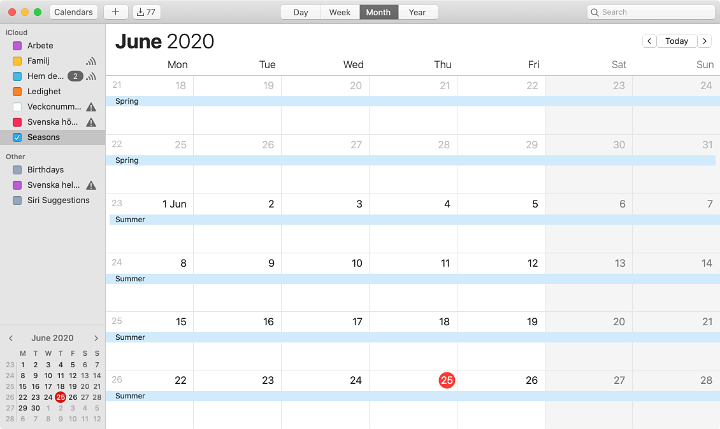 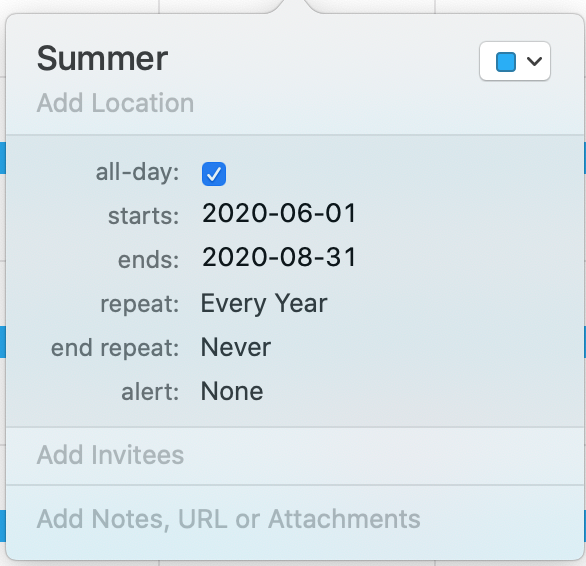 These events are set up as yearly recurring events (inspecting the "Summer entry here"), but you might have weekly or daily recurring events for a school or work curriculum or simply ordinary single events, like "Summer vacation in Mallorca", "Visit to grandma" etc :

The next step now is to export your calendar as an ".ics" file:

Now it's time to move to jAlbum. Here I happen to have a bunch of unorganized images from various seasons: 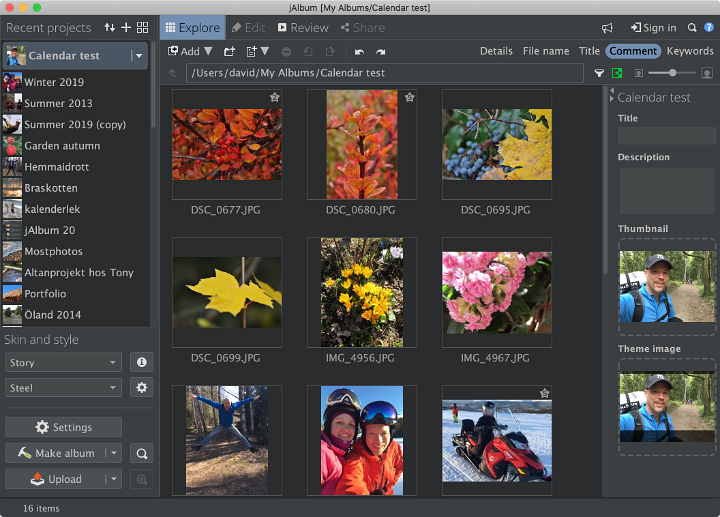 I now right-click between them and select "Organize->Group by Calendar". I'm now presented with a dialog that prompts me to point out the .ics calendar file I just exported. You can either drag and drop .ics files or specify a URL to the .ics file. Once done, I verify that I wish jAlbum to match both single and recurring events and also have the images tagged with matching events. I finally hit the Process button. 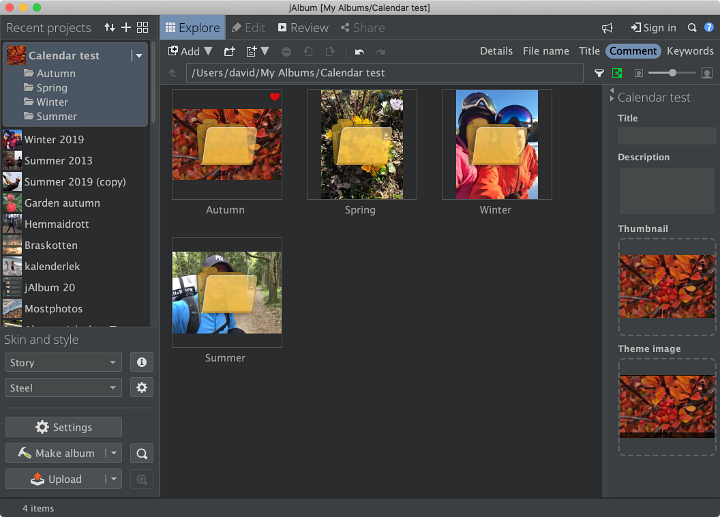 Done! The matched images have now been grouped under folders representing each matched event. If you have nested events, that is events within events, then jAlbum will create a nested folder structure too. Great isn't it? If not, just hit undo.

Remember to check out jAlbum's other flexible organizing options, for instance "Group by Date" and "Group by Place".