Base your skin on "Base"
Selling products with Turtle skin
Share

jAlbum as a site maker

We just released jAlbum 10.4. It should perhaps have been labeled jAlbum 11 cause it's packed with improvements and important bug fixes, but most of the changes go under the hood, so we decided to stay at 10.4. There is actually only one change you can notice in the user interface (hint: right click an empty area of an album project), but it opens the door to a whole world of possibilities: 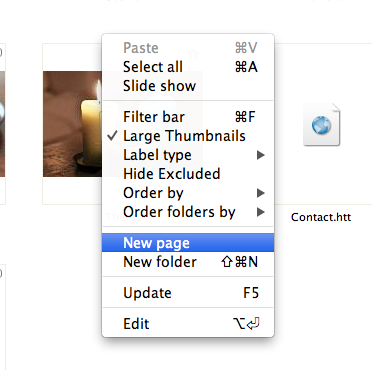 jAlbum is now not only a tool for making awesome web albums. It's a site maker too :-).

I was passed a link to a website that has a particularly good album integration:

What you see is a typical photographer's web site, where the images are in focus but there are also links to about, contact and blog pages.

jAlbum is now generic enough to support the making of these types of simple portfolio sites (all but the blog).  Here is a sample site. This is made possible by allowing users to mix .htt pages (html template pages) along with images in their album projects. The .htt files will get processed just like the template pages of skins, but they can contain any html, not just album specific html.

Here are the advantages:

Skin developers can easily modify their skins to support full web sites by including a top-level navigation bar that links to the extra .htt pages users create. They should also provide custom "page-header.inc" and "page-footer.inc" files so that any extra pages made by users get the same look and feel and navigation that the album pages have. jAlbum provides code for a simple navigation bar, so a minimal code for skin developers to add can be:

Sorry for the tech look of that. It's only meant for skin developers. That code first checks if the user has added custom web pages to the top level of the album, and if so adds a navigation bar.

So far, the following skins include site support: Turtle 3.0, Base 2.0, Galleria and Minimal. All are bundled with jAlbum 10.4.

A web site is not just about web pages and album images. You also want to include other resources, like a custom logo, favicon, about-page image, css and such. Put those files inside a folder you name "res" (stands for "resources") of your "album project". That folder will automatically be hidden so it's not visually included in the "album" you make, but the whole folder is copied to the final "album" (should be called "site", right?), and all resources within can be referred to via the ${resPath} variable, no matter where in the folder hierarchy you are.

So does a final site look? Here is a sample made using the Base skin. Notice the new "About" and "Contact" pages. The user didn't have to write one line of html to accomplish that.

You can download and unzip this sample album project if you wish to see how this sample site was made. Just drop the unzipped project folder onto jAlbum 10.4 or above to open it.

I'm excited about the potential this brings! We're not trying to make jAlbum compete with Dreamweaver, but why not make it easy to produce simple, but self contained portfolio sites? As jAlbum albums aren't that well suited for integration with server side CMS tools, making jAlbum produce the full site will so to speak fulfill the initial needs for many photographers wanting their own portfolio site.

The plan is that the next major jAlbum version shall contain a list of "site templates" that pre-populates an album project with all files needed for a full blown web site, but until we're there, this post will probably trigger your feedback and our skin community to tweak their skins to support the making of full web sites too.

Base your skin on "Base"
Selling products with Turtle skin

I like it. I came up with the idea the other day and googled it and found this thread. I do NOT want to become a web programmer. This reminds me of the days when wordperfect was just a blue screen with white letters and a blinking white cursor. Things have come some far. But I still don't find ANYTHING easy about making a website. The capabilities of jalbum excite me in the sense that I may actually enjoy coming up with an appropriate type of site made totally with jalbum. I figure- why reinvent the wheel? If someone makes the right software to help me get where I wanna be,,,then I'm happy.

That would be actually an interesting research topic, how digital has changed the way people read and write.

The "view full site" link is only available on the jalbum-site pages and unfortunately not in albums where you currently is forced to use the mobile skin on phones. We have on the todo to handle this better.

With "link domainname" you mean that you would like to use a domain like "kummod.ch" instead of kummod.jalbum.net? That is something we have discussed too....

Widgets should currently have their own css. What do you mean?

the mobile version is unusable at the portfolio pages.
I would like to use a power account for customers for their website.
I can not make it so.

In addition, the following is desirable:
-link domainname directly with album. without iframe.

-widgets with their own css. clean integrated. not somewhere down on the edge.

The skin has nothing to do with the mobile version, which is sent by jalbum server to mobile devices (only on albums hosted on jalbum.net). At the bottom of the page there is a "view full site" link you should click to see the non-mobile version. It is supposed to work for albums too.

Look at your portfolio on an iphone.
The mobile version should be able to disable it in the skin.
I have again the problem always.

You should never edit a page made with jAlbum. One thing is you always lose the edits after a new Make, but you can completely screw up jAlbum web pages by editing in DW. Edit the skin templates (Ctrl-Shift-E) or use code hooks available in some skins.

Very good news! But... When I make a new page and edit the html with for example dreamweaver, jalbum overwrites this changes when I make the album and uploads it. How can I prevent this?

Gonzalo: I have added this feature now to Base skin. You can try it now: http://jalbum.net/en/skins/skin/Base

Is there any way of hiding the file name of the pic (for example, "DSC_0185") while using the Base skin?

I tried using the same color for the text and the page, but it still shows the name on the thumbnail of the browser anyway. Any solution?

Thanks Anders, that should do the trick.

I am already sorry I placed a comment here. Now I get flooded with e-mail notifications I never asked for and cannot switch off. And NO I do not have any watches set.

Thanks for the advice David, however the buttons with the links to other albums are made with html:
Tussen de Slufter en de Muy
which has as advantage that they adapt to the text width.
I will replace the slide navigation buttons for png files in a next version.

Great Wolff,
PS. Try converting your navigation buttons to png format. Then they blend better with the background as PNGs support transparency. It looks far better than GIF images that aren't produced for the currently used background color.