It is now as easy to make video galleries as image galleries. jAlbum 11 can adopt over 160 video formats for the web - re-encode, compress, scale rotate and trim your videos!

Videos - a natural next step 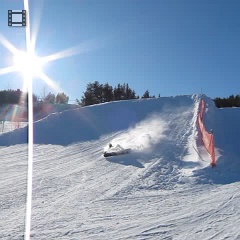 A picture is great for story telling. Everyone know the saying "a picture is worth a thousand words". We have the saying "an album is worth ten thousand words" as an album consists of several images ;-). Now jAlbum just got even better at telling a story cause you can now mix videos with images with ease. Most cameras have been delivering a mix of images and videos for over a decade, so making jAlbum adopt those videos for the web too was a natural next step. Enjoy this album showing my attempts at the big jump taken with my point-and-shoot Canon camera a couple of winters ago.

Used to be hard

Adding videos to jAlbum albums has worked in the past but you'd had to manage the many technicalities of different video formats and video players yourself. While all web browsers can display JPEG images perfectly, the same is not true for video: There are zillions of video formats generated by your various cameras and while browser "A" perfectly handles one format, it doesn't handle another, and vice versa is true for browser "B". Popular services like YouTube and Vimeo use a host of techniques to navigate this minefield so you don't have to bother - it just works. I'm now happy to tell that video now "just works" with jAlbum albums too!

Note: Most skins will need to be updated to fully support video: For videos to work no matter what web browser users are using, skins need to use an embedded video player that has the capability of using either the browser's built in support for playing the MP4 video format or Flash if the browser doesn't support MP4 (which is the case for Firefox due to license politics). Currently, our embedded player is being used by the Turtle and Base skins and skin developers are currently adopting their skins as we're speaking. 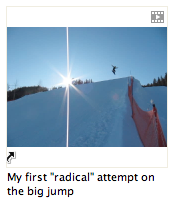 Making a video album is as easy as it can be: Drop a mix of video files (and images if you want) onto jAlbum and press "Make album".

The original videos you drop onto jAlbum may be very large, so if you don't wish jAlbum to make a local copy of them, use the alt, ctrl and shift qualifier keys on your keyboard as you drop in order to link the original videos instead. (See this blog post for more on linking files into jAlbum). jAlbum will indicate that an image or video is linked by placing a small arrow in the bottom left corner of its thumbnail.

Adopting video files for the web is a CPU intensive task so making the album the first time can take some time, but it's as easy as that.

Before making the album you may wish to adjust things like video dimension, trim the start and end of videos and select what images should represent them in the album. A new Video tab has been added to the album settings window. Here you control aspects that applies to all videos of your album project, like dimension and compression. Advanced users can go deeper here and directly specify parameters to the underlying ffmpeg video transcoder, however, we believe that most users will be happy with the default settings that have been carefully chosen to produce videos compatible for the web. 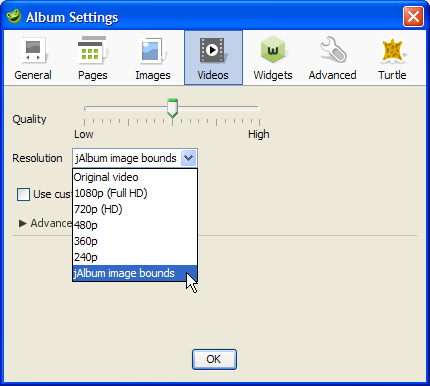 jAlbum will automatically pick an image a second from the start of the video to represent it. If this isn't the best pick, just hover the mouse over the video thumbnail within jAlbum and select "Edit", then use the new thumbnail chooser slider that is located above the caption editor to choose a suitable image. There is another slider above the thumbnail chooser which has two knobs. Use this one to trim (cut) the start and end of your videos so your viewers don't have to spend time watching dead sections. This also helps reduce the size of your final video. 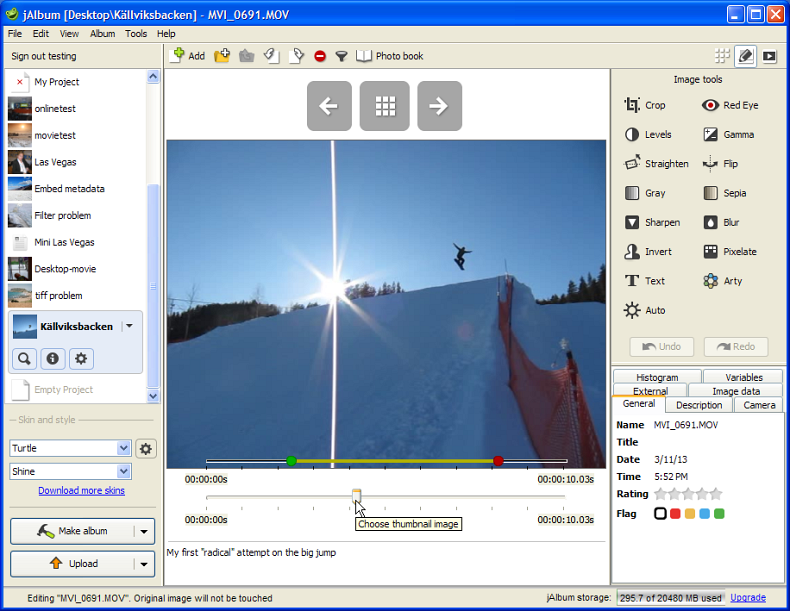 I doubt this is an issue with ordinary video cameras, but with today's mobile phone cameras, videos can be oriented in any of the four possible ways (normal, left, right, upside down). jAlbum tries to detect the orientation and ensure that the final video is correctly oriented, but if that fails, just use the rotate buttons in jAlbum's toolbar to orient the videos correctly.

To be able to guarantee that your videos will play on any web browser, the album skin needs to play them with an embedded player. It's not enough to rely on whatever player a particular browser may have attached to the destination video format (.mp4). There are currently a handful of skins like "Turtle", "Base", "Matrix" and "Slide Show 4" that have been adopted to use an embedded video player and more are coming. If your favorite skin isn't supporting an embedded player, ask the developer to add it. We're working on ensuring that all skins we bundle with jAlbum are supporting an embedded video player.

The best of all

All users holding a license for jAlbum 10 can freely upgrade to jAlbum 11! Admit it's a great deal :-). Please spread the word about jAlbum, share video albums and consider donating to us to support future development. Download jAlbum 11 and get started with videos today!

I haven't been able to put QTVR (Quick Time Virtual Reality) movies in my albuns. The making album processing shows the message "Error during video creation. Please review video settings. ffmpeg process terminated abnormally with code 1: Error while opening encoder for output stream #0.0 - maybe incorrect parameters such as bit_rate, rate, width or height" and stops.
Then when I press make again it reprocess everything, even the regular videos that had already been converted successfully before. How can I just pass the file through to be exhibited by the Quicktime plugin in the browser?
Thanks

I've just tried it, and after adding "mts,m2ts" to Preferences / Advanced / Supported video formats" jAlbum could process the MTS format videos (1920x1080i) I made with Sony Nex 5 perfectly.

jAlbum has all the functions I would apply to 99% of my video clips. Thus there is no need for an external video editor!

@Marv, I guess you're asking about how to add MP4 to the supported video types on the server. I searched for "MP4 IIS MIME" and here's one: http://www.vigleo.com/VideoBlog/tabid/104/Uplo adVideo/11/How-to-add-MP4-MIME-Type-in-IIS7.as px

@Marv, The supported formats are dictated by the underlying "ffmpeg" encoder component. We've basically added all video formats that one is reported to support, and it is hard coded within jAlbum. If you're missing a certain format, please make it available to us for testing. If it works, we'll add it to jAlbum's list of supported formats.

How do i ADD a video format to the supported formats?

@Marv, In theory the playing should start as soon as the first cca. 20 second is downloaded streamed from most servers, whatever the video size is. If you are using IIS (Microsoft) you might need to add MP4 to the supported video formats.

@Marv, no, there is no fixed limit as far as I know, but if the video is really large and the connection is slow, then it can naturally take a long time for the video to load. Please report the problem in our user forum at http://jalbum.net/forum and tell what's the size of the video. Also, please attach a link to the page that is supposed to load the video.

I loaded a video and it just said LOADING is there a limitation in size of video to use?

Hi David,
I've done that (have put it on the forum, plus all the needed specifications).

Hi. Rob, please post in http://jalbum.net/forum and include a link to the album so we can investigate. Also tell what browser you used.

Hello David Ekholm,
I've made analbum with video. When I click on the web-link of that album, I can see the video (in my browser Firefox) under Windows (v. 7), but not under my other OS, Linux Xubuntu (v. 13.04). Why??!
Rob.